It may sometime happen that you forget to disable sound of a laptop and bring it out then the laptop suddenly sounds unexpectedly.

Especially about Mac, it always sounds at starting OS X. It is very annoying so that you may want to disable it.

Here, I corrected some methods to disable such a start up chime.

The problem of the sound in the outside is making sounds from an internal speaker.

Here, you need to be careful that when you connect such an external speaker to Mac, The menu in Sound of System Preferences (or the menu appearing when the speaker icon in the menu bar is clicked with ⌥), the external speaker overrides the internal speaker and it disappears, while speakers/headphones which are connected with Bluetooth are listed from them.

So, you need to change the internal speaker after disconnecting all other sounds related thins.

Volume Rest is a menu bar application which can change a volume at such Shutting down or Sleeping. 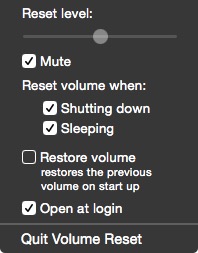 Here, if you set Mute when Shutting down, then a start up chime is not sounded.

If you want to just stop a start up chime but want to keep a sound level after booting, you can use Restore Volume option.

So that I set like above picture: the level is Mute, Reset volume when both Shutting down and Sleeping, not Restore volume, and Open at login.

It should be noted that this application changes a sound level of what is currently used.

So if you connect a headphone, and make Mac sleep, then a sound level of the headphone is changed, an internal speaker’s level is not changed.

NVRAM(Non-Volatile RAM) is a small memory which has information of such speaker’s volume or display’s resolution1.

In it, there is SystemAudioVolume and some articles say that a start up chime’s sound level can be changed by this parameter.

You can check the parameter by nvram -p:

To set new value, put value starting with %, like

But when I tried it, sometime it worked, but sometime not and the value of SystemAudioVolume was restored to [.

This method seems unstable and can not be used for now.

I found some articles argue about SystemSoundVolume, but I think it is just a typo (or SystemAudioVolume was such a name before…?).

StartNinja is an application to suppress a start up chime with a cute icon.

It can be used in Yosemite, too.

If you are using Homebrew, you can install it by Homebrew Cask:

When you launch the application, you will see following window:

First, push Get Current Setting, then you can change ON or OFF. Above status means ON, i.e. a start up chime is sounded. 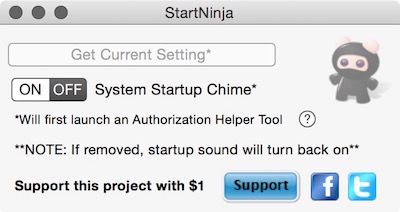 If you set OFF, it is disabled.

Once it is set, the application is not needed to be run.

It affects only on the start up chime, so a sound level after booting is not changed.

I checked above SystemAudioVolume, but it seems it doesn’t change it, so it changes something different.

As written in the window, the setting is removed if StartNinja application is removed. It means the application implements some tasks at a shutting down and booting, so maybe it just changes a sound level and restores.

This application also changes what is currently used. Therefore, if an external speaker/headphone is connected and an internal speaker’s sound level is not zero, a start up chime is sounded at booting even if you set OFF at StartNinja.

This is also an application which changes a sound level and restore at shutting down/booting.

It needs to be run, so you need to launch it at login.

But it doesn’t have a function to set to load at login, therefore you need to put it in the start up items by yourself.

It doesn’t have a function to change at sleeping, so I think Volume Reset is better to be used.

It just changes a sound level at shutting down.

When it is launched, you will see following window: 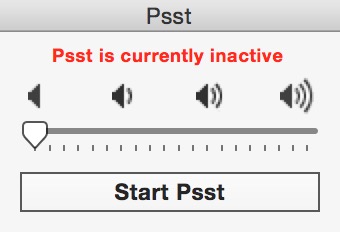 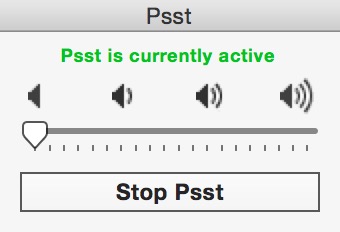 Under this condition, a sound level will be changed at shutting down. It is not needed to keep the application running.

But it works only once.

After rebooting, you need to set it again, so it is not so useful…

StarupSound.prefPane adds new menu to manage a start up chime in System Preferences.

But it seems it is no longer compatible after Marvericks.

It is paid application, but it is different from above applications that it can change an internal speaker’s volume level directly.

I’m currently using Volume Reset as it satisfies what I want to do. A start up chime is annoying, but there are more opportunities to bring it under sleep and not want to make sounds.

I think it would be better if I can use SystemAudioVolume, but it doesn’t work well.

By the way, though I have written about disabling a start up chime, Mac has a function to notify problems by the start up chime by changing a number of times or tone.

So if you need this function, you should not disable a sound.

Nevertheless, I want to disable it.